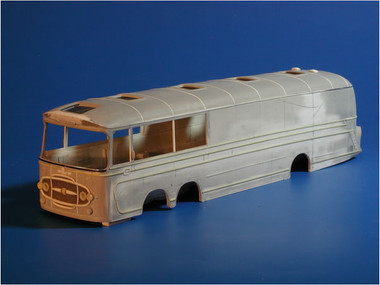 In 1966 Formula-1 season, Jack Brabham used engines from Australian engineering firm Repco, which had never produced a Formula One engine before, few expected the Brabham-Repcos to be competitive, but the light and reliable cars ran at the front from the start of the season. At the French Grand Prix at Reims-Gueux, Jack Brabham became the first man to win a Formula One world championship race in a car bearing his own name. Jack Brabham won his third title in 1966, in 1967, the title went to Brabham's team mate, New Zealander Denny Hulme. The Brabham team took the constructors' world championship in both years. At the start of the 1966 season, Brabham team received a new transporter, which replaced their old Bedford. The new transporter was one of the best in the paddock. It was ordered in 1964 and was made by Plaxton on Bedford research chassis RHD62/3 using as a base their experimental unique VAL Panorama body which was built in 1961 and had a rear-end distortion, so it could never again be used for coaching work (information from the book: Fare Stage Series Volume 6: The Bedford VAL by Robert W. Berry; Trans Pennine Publishing Ltd; www.transpenninepublishing.co.uk, thanks to Alan Earnshaw for providing this information). It could hold three F1 racing cars, a couple of spare race engines, gear boxes, tools and it seated up to five team members. Bob Ilich, member of the Brabham team, remembered: 'When we first got the new transporter, we loaded up and were off down the Autobarn to Monaco. Jack came to us and said he would see us down there as he was going in his plane. However once we got rolling on the Autobarn with the safety of twin front wheels, five speed gearbox and two speed differential, we found we could cruise around 100 miles per hour and we beat Jack to Monaco!! Jack had a big smile on his face.'

This product hasn't received any reviews yet. Be the first to review this product!

All prices are in GBP.